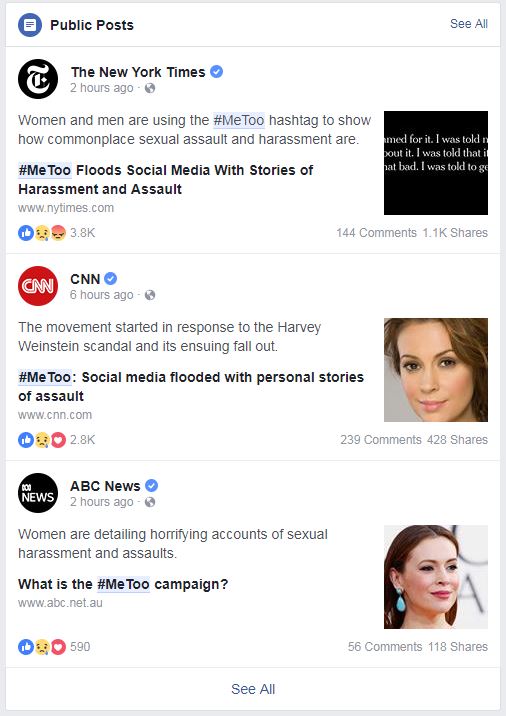 At first, I was hesitant to re-post “Me Too.”

I wondered if the fact that I’ve never been sexually assaulted might mean that I shouldn’t post. I figured that the small amount of harassment and bullying I’ve experienced, in the grand scheme of things, is not shout-worthy. I thought about all of my friends, both women and men, who have endured much, much worse.

But…the #MeToo movement is about awareness. It’s about defining the spectrum of abuse. It’s about showing people just how widespread a problem can be.

When it comes to my female friends in particular, all of us have gone through it. It’s like some screwed up initiation ritual. A rite of passage into womanhood.

Everyone’s definition of what’s considered wanted vs. unwanted attention is different, so I know it’s hard to pinpoint what is acceptable across the board. However, experiencing that “special” feeling of discomfort and humiliation due to sexual harassment/bullying/sexual assault, is completely unacceptable. It’s important to have an ongoing conversation about it. This is both for the benefit of victims (so they don’t feel alone or as if they are overreacting) and to prevent future perpetration (so that would-be bullies or predators will know what is considered wrong and might even go so far as to stop themselves from partaking in such behavior—if they are capable of self-reflection).

So with that in mind, I wanted to share some details on a few notable run-ins I’ve had with sexual harassment over the years (which includes being bullied about things of a sexual nature).

One day at lunchtime, when we were all supposed to be in the cafeteria, I realized that my friend (a boy that everyone probably knew I had a crush on) hadn’t left the classroom. He was there by himself, crying about something. So I left the lunchroom and went to our empty classroom to see if he was ok. Within a few minutes, our teacher walked in a got really angry that we were in the room alone together. One kid caught wind of it, and suddenly I had to endure the obscene rumors spreading like wildfire around the school. “Mrs. Durniak caught them having sex!” “She found them with their clothes off!” “Stephanie is a slut!”

I was in fourth grade. I didn’t even know what sex was at the time. The rumors made me so uncomfortable that I became desperate to avoid ever putting myself in that sort of situation again. A year later, when I was afraid that the shaming would start up again, I punched him in front of the class just to convince people that I didn’t like him.

It was April and it was starting to get warm out. I’d gone through a growth spurt that winter, and so my parents hadn’t bought me new summer clothes yet. I wore a pair of shorts from the year before that still fit, though they were a little tight. That was enough to bother people, apparently.

One girl and one guy were particularly bothered, so they got a bunch of other kids to sing (to the tune of the Nair commercials) “who wears short shorts?” every time I passed in the hallway. It went on long enough to the point that a few other girls in the grade thought this bullying was extremely upsetting and went to the principal about it on my behalf (if any of you are reading this, thank you for that). Unfortunately, the bullying continued, and it wasn’t until I took the high road and sung back, agreeing that “I wear short shorts” that the harassment finally stopped.

I was at my first ever part-time job, working in the bakery section of a deli. I was the youngest person there, and most of the other employees were junior and senior guys from a neighboring high school. I was pretty shy, and so didn’t go out my way to talk to the guys, even though I thought all of them were pretty cute and I would have welcomed the attention of getting asked out. I did not welcome the type of attention I ended up actually receiving.

One guy decided, for some reason, that he needed to make me feel like the lowest of the low. He started barking at me every time I passed him, which got a few of the other guys to do that too. This guy would also ask me things of a sexual nature like, “Are you a freak?” (as in, freak in the sheets), and would sort of “pretend” to hit on me and then laugh about it with the other guys. When he wasn’t around, the other guys were “normal,” but this one dude-bro’s presence always changed their demeanor from sweet/helpful to rude/predatory.

I started to get paranoid, thinking I must be super unattractive for these guys to go out of their way to be nasty to me. I couldn’t comprehend any other reason why they’d treat me this way, and it made a big dent in my self-esteem that lasted throughout high school.

I was in a serious relationship throughout all of college, and so besides flirting with and dancing with guys at parties, everyone pretty much knew I wasn’t available. I was certainly guilty of leading people on at times, but everything was good-natured and people understood. That didn’t necessarily stop this one guy, one night in my senior year, from trying to put his hand up my skirt. I kept swatting it away and saying that, “I have a boyfriend,” but we were also with a group of people and I didn’t want to ruin the fun we were having. After enough times, I moved away from him, and one of my friends who noticed wedged herself in between us so he wouldn’t keep trying to touch me.

Later that night, he text messaged me, talking about how turned on he was, but also apologizing for his behavior. I reiterated that though I was flattered, I wasn’t looking to date him—I had a boyfriend. The next day, we met up in person, and he officially apologized. We hugged, and I thought everything was good. Then he said, “But, you know, if you are ever on the market…hit me up.”

Witnessing harassment in the workplace

I’ve been very lucky in that I’ve never felt sexually harassed at work by colleagues or higher-ups. There was only this one time at one of my previous jobs, when a mail guy who had been moved to my floor (for dubious reasons) asked me what my plans were for the long weekend. I said I was going to hang out with my boyfriend, to which he responded, “Oh, so are you guys gonna drink some wine? Make love? Not make love?” And then when I didn’t answer he said, “Come on, we’re all adults here.” I didn’t end up reporting him because he’d already been reported for other behavior and I was pretty sure he was on his way out.

I wanted to include this other anecdote of harassment. This time it’s about behavior I witnessed, behavior that shows men can be victims too. And that women can be perpetrators:

I once witnessed a female colleague at a previous company inappropriately touch one of our clients. We were all drinking together, so at first I didn’t think anything of it, but when she left the room, the guy said he was very uncomfortable. A few other people commented that “she does this all the time.” A few years later, I found out from a male boss at a completely different company that he’d received unwanted physical advances from this same woman (“she put her hand where she wasn’t supposed to”), and that this was a pattern of behavior that many of his male friends had also endured from her.

I’m keeping all of these stories anonymous because I don’t feel comfortable spreading things about these people, even if they’ve wronged me or others. I also know that many of them have already received some form of repercussions over time, in one way or another.

Still, I’m nervous to be sharing these details (there’s a part of me that fears my honesty will somehow be turned around on me). But I think that’s the type of fear this tidal wave of “me too’s” on social media is trying to assuage. No matter how you slice it, our cultural norms won’t improve until our stories are told.

Until then, the response will always be “me too.”